Difference between revisions of "Gabriel Caruana"

From M3P
Jump to navigation Jump to search 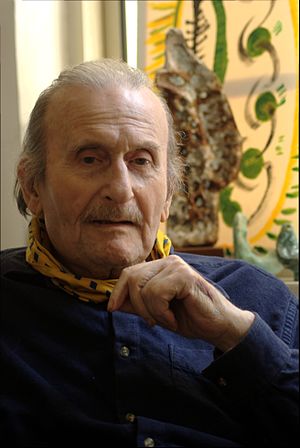 He exhibited internationally, including a group exhibit by Maltese artists at Hunter College in 1996, and at venues such as the head office lobby of the Bank of Valletta.

Gabriel Caruana was born in Balzan, Malta on 7 April 1929. He was the son of Anthony Caruana, Malta Police Force sergeant and Beatrice Ebejer Michelizzi. He studied sculpture at the Malta Government School of Arts in the classes of George Borg (artist), Emvin Cremona and Vincent Apap. In 1980 he married Mary Rose Buttigieg, an English and Art teacher and artist. The couple had two daughters; Gabriella and Raffaella, born respectively in 1981 and 1983.[1][2]

Gabriel Caruana was a pioneer of modern art in Malta, drawing inspiration from popular art traditions and the architecture of the Island.[2]

Caruana held solo exhibitions in Malta, England, Italy and Switzerland and showed his work in group exhibitions in Osaka, Detroit, Munich, Tripoli, London, Israel, Melbourne, and several times in Malta. His works can be found at the International Museum of Ceramics of Faenza, at the Whitworth Art Gallery, Manchester, at City of Manchester Art Gallery, and at the National Museum of Fine Arts Malta.[3]

Between 1971 and 1990 he was a ceramics teacher at the School of Arts and Crafts at Tarġa Gap in Mosta, which is now the MCAST Institute for the Creative Arts.[2]